The second annual OSWARP (Old School Wargaming and Role Playing) convention will be held in Morristown, NJ this year over Independence Day weekend, concurrently with the Dexcon convention which goes from July 1st-5th, and both are hosted by Double Exposure, who put on a number of excellent gaming conventions in New Jersey throughout the year.

OSWARP is intended to bring together gamers who love the classic games from the 1960's through the 1990's, whether they be wargames, board games, miniatures, or role-playing games. It's also for folks who love more modern games that emulate the play and feel of those older games. Heck, it's for everybody!

Registration is now open, as are proposals for games. If you have an old-school game you'd like to run, now's the time to submit it! The deadline for game proposals is June 5th, 2015.
Posted by Greyhawk Grognard at 12:00 PM 3 comments: 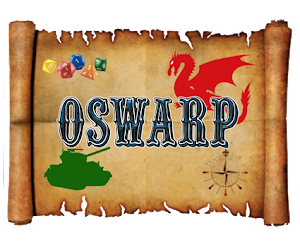 Have a question? Send us an email, and we'll get back to you right away.